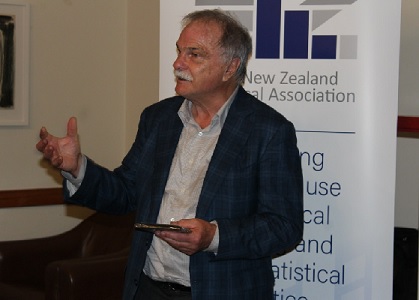 Len’s interests include social policy, demography, statistical methodology and the application of information technology in statistical systems. He is interested in the promotion of research methodology in public policy analysis and decision-making with past interests particularly in retirement provision and taxation policies.  Len has been influential in advocating for the use of data in a wide range of policy contexts. From his days as a senior executive at Statistics New Zealand to his active contributions, he is one of New Zealand’s most visible and respected statisticians.

The purpose of the award is to promote statistics within NZ and to recognise an individual’s sustained contribution to the promotion and development of statistics.

Nominations should be sent to the Convenor of the NZSA Awards Committee, by email (TBC).

The criteria for the award are:

i) publication of an exceptional body of original statistical research undertaken within NZ; or,

ii) a prolonged and outstanding contribution to statistical education; or,

iii) playing a key role in consulting on major, innovative research projects that has direct relevance to NZ; or,

iv) making a leading contribution to the promotion of statistics within NZ over a sustained period.

As the Campbell Award is usually presented at the Conference dinner, the deadline for nominations will usually be late in September.  A call for nominations will be sent to all NZSA members about two months prior to that. To make a nomination, please contact the Convenor of the Awards Committee. The Awardee is presented with a plaque and a certificate, and is a guest of the presentation event.

Recipients of the NZSA Campbell Award are: